Biophilia, literally defined, simply means a love of life and the living world.  At this basic level it’s not a concept and no claims are made.  I suppose I can say I “have biophilia” because I enjoy visiting natural places like  national parks or even not-so natural places that feature natural elements, like botanic gardens.  We start running into biophilia as a concept when claims are made that there is an instinctive bond between human beings and other living systems and that bond has an impact on people beyond mere enjoyment of nature.  This idea was popularized by Edward O. Wilson, whose hypothesis is exactly that: humans instinctively seek to connect with natural places due to an evolutionary psychological process that’s inherent to humankind.  There appears to be some support in the scientific literature for the idea that there is a psychological impact on people when they interact with nature, but I am interested to see how far that impact goes toward supporting the claims that are made in favor of biophilia as a design feature.
One of the scientific studies that most frequently is cited for the support of biophilia as a concept for architectural design is “View through a window may influence recovery from surgery” by Roger S. Ulrich published in Science in 1984.  I have seen this presented in several powerpoint slides in support of various claims: 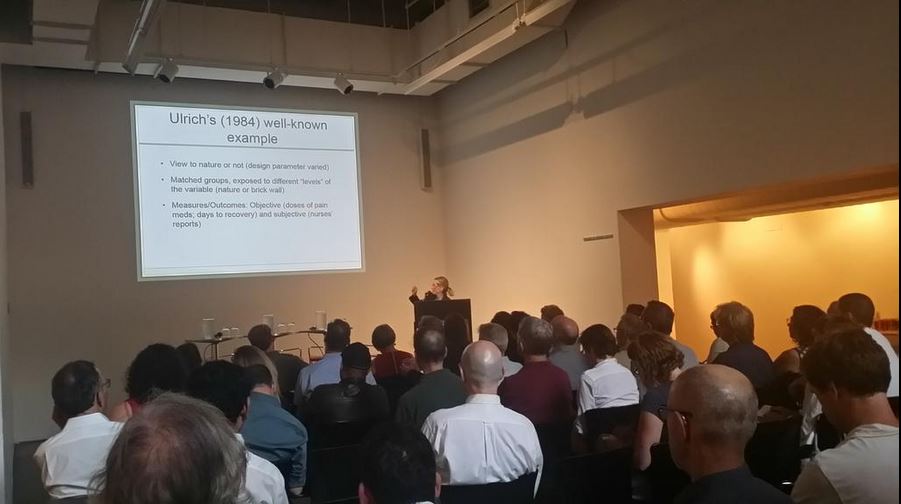 The smaller text in the slide in the image reads:

In the study, Ulrich divided 46 post-surgical patients into pairs, making 23 data points.  Each pair of patients had either a room with a view of a stand of deciduous trees or a view of a brick wall.  He tracked various outcomes for the patients, including number of days the patients stayed in the hospital, how much pain medication they required and how they reported feeling.  In several of the measures (but not all), the patients had improved outcomes when they had the tree view rooms.

This study, on its face, provides a fairly dramatic endorsement for biophilia, but its results must be balanced against the design of the study, which was small (again, only 46 patients over 9 years), and non-controlled, in that it did not include include a cohort that has a view other than those two choices, or no view at all, like a blanked-off window.  The entire result could be attributed to the patients in the view room walking to the window more frequently, since it is established that post-surgical patients who walk around recover more quickly.  The study does not mention how frequently patients were ambulatory, so that’s a guess on my part.  If true, that suggests the patients had a preference for tree views, but it does not lead to the conclusion that there is innate psychological effect of tree views.

All and all, the 1984 Ulrich study is interesting and suggests a path for further research, but for it to be cited as a settled matter that nature views have healing power seems to overstate things in my opinion.

More recently, a preponderance of related research has settled on the conclusion that providing nature views, whether real, virtual, video or photographs has a noticeable stress-relieving effect.  In Physiological and affective responses to immersion in virtual reality: Effects of nature and urban settings, published in the Journal of CyberTherapy and Rehabilitation college students were immersed in either a virtual urban scene, a virtual natural scene or a scene with bland geometric shapes.  They were challenged with stressors before and after being immersed.  The researchers found that the participants who explored virtual nature environments had lower stress and improved affect (self-reported how they felt) than the other groups, and claimed “restorative effects” including restored attention, emotional and cognitive states.  Later, the same researchers conducted Cognitive and affective responses to natural scenes: Effects of low level visual properties on preference, cognitive load and eye-movements published in the Journal of Environmental Psychology participants were shown natural and urban scenes on head-mounted displays, and then the scenes were distorted in various ways to test how our visual-stimulus processing system responds (using blink rates and how rapidly participants’ eyes focused on various elements in the images).   They concluded that un-altered natural scene images generated the lowest cognitive load, and this suggests a mechanism for our response to natural scenes.  They also reiterated and restated the same results about restorative effects.

The bulk of evidence published supports the hypothesis that some positive effect is realized when people view natural scenes, but there is significant difference in the amplitude of the effect, where more recent studies are more focused on emotional, physiological and cognitive states and less on healing ability, with the experience of pain being the primary overlap.   It’s a well known phenomenon in science that early exploratory studies find more profound effects, and when more precise, larger and better controlled studies are conducted, the effects decline in significance.  It’s also an unfortunate and well-known phenomenon that the profound results in the preliminary studies are those that get remembered and cited, especially in the mainstream media.  The more mundane results of the later studies get far less attention, but are usually closer to the truth.

Given that the big claims have taken hold in the architectural community’s consciousness, it’s not surprising that manufacturers have grabbed on that concept to say that all manner of products have biophiliac features, even if it’s just a wood grain in vinyl flooring.  It’s worth being skeptical and remembering that the very basis of these manufacturers’ claims are based on overstated effects.

So where does that leave the claims made by promoters of environmentally sensitive design strategies that biophilia is a positive (and should be even a necessary) feature of architectural design for the benefit of building occupants?  I think we haven’t reached the critical conclusions about this yet in that some questions are not answered, like the mechanism of biophilia and the duration and extent of the benefit.   I think the best approach for architects is to consider using natural features like plants, healing gardens and emphasizing nature views, but only to the extent that Owners are interested in them.  They should not repeat overly broad claims in an attempt to sway Owners to spend money that may not provide the value promised, especially since virtual or photographic natural scenes are shown to have roughly equivalent benefit and can be provided more easily.

One thought on “Is Biophilia Really an Added Value in Architecture?”